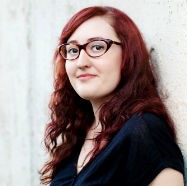 Emily Heller has too many credits too list, but if we were going to we’d start with Late Night with Seth Meyers, and Conan, and John Oliver’s New York Stand Up Show and @midnight. We’d probably also include an appearance at the prestigious Just for Laughs Comedy festival in Montreal as well as being named a comic to watch by both Comedy Central and Variety. You can also catch her as the creator and star of the Above Average series The Future. She also appeared as a regular or TBS’s Ground Floor and write on FOX’s Surviving Jack. Emily prefers the nickname “Hell Bone”