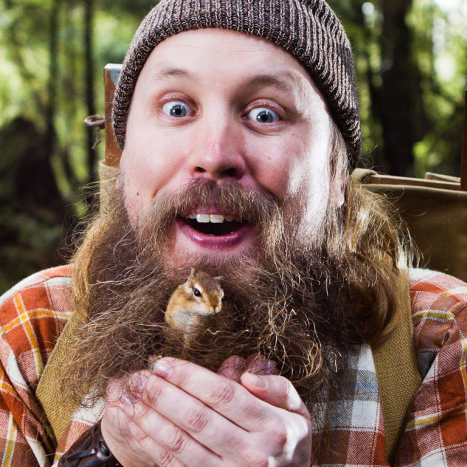 Graham Clark resides in Vancouver, BC. He is a 3-time Canadian Comedy Award nominee and co-host of Maximum Fun’s Stop Podcasting Yourself. Clark is a regular on CBC’s The Debaters and has appeared at Just for Laughs, Halifax Comedy Festival, Winnipeg Comedy Festival, and Bumbershoot. He is a winner of the Yuk Yuks Great Canadian Laugh Off and has appeared on HBO’s Funny As Hell. He has filmed his own hour-long Comedy Now special for CTV. Graham is also the creator of beardpaintings.com, where he sells paintings made using his beard as a paintbrush and donates the proceeds to charity.

“Clark is a crowd pleasing observational comic” –The Grid, Toronto

“His laid-back delivery and appearance are juxtaposed against a refined, observational comedic approach that is clearly the work of a true performance artist.” – Canadian News Service

“Headliner Graham Clark told us he’d start with the “C material” to allow for everyone to get back from the toilet. Of course, his C material is as good as many comics’ A stuff. He’s also developing some real depth to his jokes. Instead of one-and-done, he really gets into a subject now. His bit about rich people and their tart budgets and propensity for saving dead trees was meaty, reminiscent in its inflection and structure of Brent Butt at his finest.” – The Georgia Straight